How Ancient Indian Temples came into being? - Green Hat Studio
Skip to content

How Ancient Indian Temples came into being?

How Ancient Indian Temples came into being?

Looking back in time, the Indian sub-continent has been through diverse evolution, be it in discoveries, social structures, arts and cultures, science and technology, architecture and so on. There also have been revolutions with foreign invasions on Indian lands. All these have left remarkable impressions on the indigenous identity of India. India is known for the conscientious knowledge that the ancestors were well versed with. This is evident with the facts that so many inventions in the fields of science (astronomy), mathematics (concept of zero), medicine (Sushruta’s theories and practices of Ayurveda), lifestyle (Yoga and Pranayam) etc took place in the Indian subcontinent. When we look at ancient Indian wisdom, it is the Vedas that form a deep rooted foundation in the evolution of the sub-continent. One of the areas that interested me is the conceptualisation of the “Indian Temple” and this article emphasises the concept of “Temple” as a physical and spiritual expression, through its evolution – spiritually and architecturally.

The Vedic literature is an ocean of knowledge which was handed down from generation to generation by oral transmission. It is not just religious knowledge but also provides one a plethora of spiritual well-being of humans. Such elaborate collection of hymns, prayers, incantations and sacrificial formulas expressed in the form of Samhitas, Brahmanas, Aranyakas and Upanishads shows detailed study and thought behind its conceptualisation. The newer additions were regarded as improvisations or changes with respect to changes in society and human behaviour. What is thought provoking is the fact that humans always regarded some super power which is above their capacities and they constantly were under the influence of the behaviour of those super powers. Vedic Gods were nature Gods – Agni, Indra, Varuna, Rudra, Vishnu, Surya, Chandra and female Gods like Ushas, Prithvi, Nirruti etc. The Vedic tradition believed in the ideas of give and take and were primarily based on the performance of the yadnya. It was more of a karma kanda (ritualistic section) where the yajmaan would perform the yadnya at a temporarily erected structure made of timber and reed. The object of veneration was the vedi or the fire alter with the yadnyakunda where offerings in various forms were given through the sacrificial fire to the deity.

The Vedas give us information about the hidden aspects of the deities and their symbolic significance in the human body. Since it has a holistic approach, it encompasses the entire gamut of human endeavors – bodily, mental, societal, environmental and spiritual aspects. The very fact that the Vedic deities were symbolically perceived as a part of our own system i.e. human and then characterized as per our basic needs i.e. food, shelter and survival illustrates such a fundamental ideology deeply rooted in thought. Symbolism is also reflected in the mental perception of these deities e.g. Varuna with thousand eyes – symbolism in thought. In later periods we also see symbolism in physical appearance i.e. the elephant headed Ganpati or the eight armed Durga. In temple sculptures we find this symbolic representation of Gods and Goddesses as the ones one of us yet they are something more (more powerful, more skilled or more stronger) than us.

During the Vedic era, there were no temples. The Vedic people were nomads who used to travel from one place to the other. As they advanced and started practicing agriculture, the lifestyle became more settled than nomadic. They no more depended completely at the mercy of these natural forces and had gained knowledge about certain basics of survival. Sooner as life became little predictable and changes in social structures happened, there came many changes in the lifestyle of the people too. The ritual of the yagna slowly started fading away giving way to the puja. Puja involved more of an emotional connect with the God. Gods were worshipped, appease and adored. Gods were now perceived as a part of us i.e. human but with some superpower, and hence not human but God.

This change in thought led to ideas of having a house for the Gods – architecturally expressed as a Temple i.e. God’s residence. Gods in the form of idols started taking shape. It was preferred to enhance the emotional connect between the devotee and the idol in humanised form. This idol would be different to any ordinary idol, as the aura it carried could respond to the sensitive and emotional connect that a human needed. With more and more humans seeking this aura, it could fade away in time, hence, it was needed to be securely preserved. A space which is secluded, dark and with just one side open responded to this requirement. It resembled the womb – where life begins, hence termed as the “garbhagriha” or “gabhara”. Later rituals and ceremonies related  to the God-human relationship became more elaborate, we see evolution of the temples corresponding to the same.

Temples were initially rock cut and later we see examples to structural temples too. Early examples include temple no. 17 at Sanchi having just a square garbhagriha with a rectangular porch and flat roof.

Addition of an ambulatory path or the pradakshina path is seen in examples like the Shiva temple at Bhumara. At Dashavatara temple, Doegarh, a small squat shikhara or the pyramidal tower is seen along with a high plinth. Here we also see the concept of a Panchayatan making its entry. These examples belong to the Gupt era which is also known as the phase when temple architecture was in its formative stage.

During the Chalukyan phase in the southern parts of India,  we see many experiments done at Aihole and Badami, and, at Pattadakkal in Karnataka these temple styles achieved standardization. Three distinct styles viz. Dravida, Nagara and Vesara evolved. 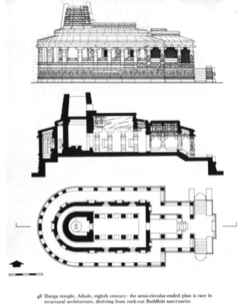 Architecture responded to the changes of time and rituals, in the form of additional spaces like antarala or the vestibule, different mandapas or halls for public gatherings like natya mandapa, bhoga mandapa, kalyana mandapa etc. 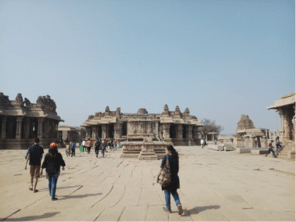 The temples were slowly progressing into not just free standing structures but were now encompassed in a temple complex with gopurams or entrance gateways facing the four cardinal directions. These compound walls also house miniature shrines or the devakulikas of the deities belonging to the pantheon of the main deity of that temple.

As the rituals become more and more elaborate, temple towns came into being with further additions of concentric rings of walls and walkways or the prakarams. Interesting additions included the 1000 pillared halls, water tanks and so on.

At Green Hat Studio, we believe that designing a space for you means considering multiple aspects like space, construction integrity, the economy of means, aesthetics etc. We are continuously exploring to enhance your experience by increasing the quality of your space.